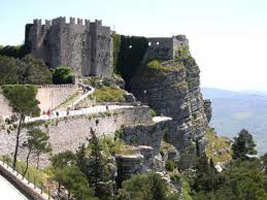 Day 1: Palermo Airport
You are greeted at Palermo Airport and transferred to the hotel. Upon arrival, time to unpack and rest. After dinner minitour-Palermo by night.
Day 2: Palermo- Monreale
After breakfast, your local guide (half day) will show you where the Arab-Norman art and architecture reached the pinnacle of its glory with the Monreale Duomo, launched in 1174 by William II and represent the scene from the Old and New Testaments all in golden mosaics. Then to the Palatine Chapel in Palermo, which was the crowning architectural achievement of his Grandfather Roger II. Continuing by seeing in the afternoon with the driver, Piazza Pretoria, Santa Caterina and Via Maqueda with its four corners who converge Palermo at a quartet of baroque palaces left over from the heyday of Spanish rule dates from the 1560, and Markets. Then, you will visit the Cathedral with various style built through the Greek-Roman, Norman, Arabic, Islamic domination. Return to the hotel.
Day 3: Monte Pellegrino-Mondello-Segesta
After breakfast, depart to visit the church of the Patron Saint of Palermo, called Santa Rosalia. You can admire the view of Palermo city, after you visit a typical fishing village, Mondello.
Then you will continue the tour towards Segesta, where you can admire the Temple and the Theatre surrounded by a suggestive landscape. Then transfer to Marsala. Dinner in Marsala.
Day 4: Erice-Marsala
This day you can visit the medieval village of Erice, on the top of a hill, and walk through its tiny, characteristic streets.  You visit in Erice a lovely pastry-shop to taste local marzipan and almond-based candies, made from recipes developed generation ago. Time to leisure.
Then go to Marsala which is the home of the world-famous Marsala Wine and the main town of wine-production. To reach this town, we cross the romantic Salt Way Road where you will admire the saline-saltpans and the great windmills.
Then, during afternoon we transfer to a local Winery Pellegrino, an important Sicilian winery that has always believed in the extraordinary enological potential of its land and has much years of experience in producing premium wines. Here, you will taste different wines: the whites, beginning with their sensory characteristics and ending with their labels; the red, with incisive identities and intense or at times impenetrable color, full by nature yet richly elegant and soft; the natural sweet, where the growing success is due to their capacity to please, their moderate alcohol levels and their versatility in matching foods and occasions for consumption. Return to the hotel in Marsala.
Day 5: Selinunte-Agrigento
Today after breakfast departure to Selinunte, to an ancient city founded by the Greeks in the 8th century BC. Here you can visit the ruins of the destroyed ancient city and the the ruins of the temples.
Then you will be taken to Agrigento, where you can have lunch and in the afternoon, after that you can admire the Valley of the Temples. Return to the hotel in Agrigento.
Day 6: Piazza Armerina-Caltagirone
After breakfast continue your journey across the island from Agrigento to Piazza Armerina,a spectacularly sited town lying inland in central Sicily, to look at the extraordinary mosaics of the Roman Villa del Casale, which are the most spectacular in the world, and the antique Roman thermal bathes. In the afternoon you go on to visit Caltagirone, which city is famous for its ceramic production. Here you have the opportunity to admire a workshop where you will be shown to the ins and outs of pottery-making. Then you continue your tour to Siracuse to the hotel.
Day 7: Syracuse
Today’s trip takes you around Syracuse. Syracuse city and port of Italy, capital of Syracuse Province, on the southeastern coast of the island of Sicily. The old portion of the city is located on Ortygia Island, separated by a canal from the mainland. The city is a tourist center, a fishing port, and a marketing center for agricultural products, particularly olive oil and citrus fruits. Syracuse was founded by the ancient Greeks, and in antiquity it was the largest and most powerful city in Sicily. The remains of the old city include a Greek theater, cut out of rock and designed to hold an audience of 15,000; a Roman amphitheater; the great altar of Hiero II; and the citadel built by Dionysius the Younger early in the 4th century BC. The Fountain of Arethusa is a famed landmark. Overnight stay in Syracuse.
Day 8: Catania-Mount Etna
This morning you depart from Siracuse to Catania where you can visit a typical fish market and the old town center. In the late morning go up to the slopes of Mount Etna, which is the  highest active volcano in Europe. Much of the surrounding landscape is covered with solidified lava. Thanks to this lava and the volcano minerals the wine in this area is really unique and different from other Sicilian wine. You can have lunch here in 2000m high. In the afternoon you go down from the mountain to Santa Venerina. Here you will visit the Murgo Winery. In the end of the day you will be transferred to Taormina to the hotel.
Day 9: Taormina-Savoca-Taormina
This day starts with visiting the Greek Theatre and shopping in Taormina’s beautiful center. Then your tour leads to Savoca, to a small village 20 kms away from Taormina on the top of the mountains, where the world famous film, The Godfather was shot.
Return to the hotel in Taormina.
Day 10: Catania Airport
Departure. Transfer from Taormina to Catania Airport